Mildred and Richard Loving, two residents of Virginia, were found guilty of violating a state statute that banned inter-racial marriages, and sentenced to a year in jail or to leave and not return to Virginia for 25 years. In a unanimous ruling, the Supreme Court found the Virginia law had no legitimate purpose “independent of invidious racial discrimination.” It also found the law violated the Due Process Clause of the Fourteenth Amendment.

Later in her life, Mildred Loving identified as “Indian” rather than Black. Her mother was part Rappahannock and father Cherokee. Many persons in Virginia, including Native-Americans, were taught to identify as anything other than Black. Anti-miscegenation laws banning interracial marriage were introduced early in the American colonial project despite not being present in British common law. They functioned to legally establish racial categories to perpetuate white supremacy and protect the colonial elites’ economic interests, which relied on the labor of enslaved peoples primarily of African descent who became legally categorized as Black. 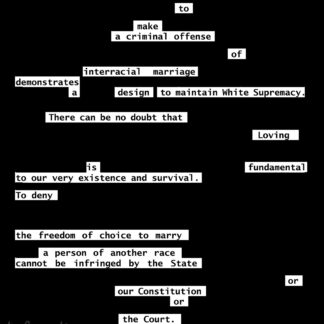