While several hundred suits for freedom were filed by or on behalf of enslaved people in the decades before the Civil War, this case was the only one to reach the Supreme Court. After unsuccessfully attempting to purchase his and his family’s freedom, Dred Scott brought a case on the grounds of wrongful enslavement and that residence in a free territory meant he and his family were free and could not be re-enslaved. The Scotts pursued their case for 11 years through the courts. The Supreme Court ruled against them in a 7-2 decision, and the Scotts were sold to the sons of Peter Blow, Dred Scott’s original owner, and were freed.

The ruling was indicative of the political dynamics at the time that used states’ rights arguments to ensure the American economy could continue to rely on enslavement for labor. Chief Justice Roger Taney, born into a wealthy family of enslavers, infamously penned the majority opinion. He argued that Black people, free or enslaved, could never enjoy the rights of American citizens under the Constitution. This case also ruled the Missouri Compromise unconstitutional because outlawing slavery was left for states to determine, not Congress. 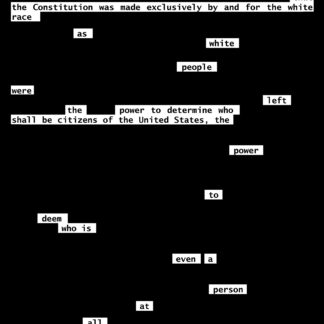