Virginia Minor was an officer in the National Woman Suffrage Association, which made a uniform attempt to challenge voting restrictions in various states across the country in 1872. After Virginia Minor was barred from voting in 1872, she and her husband Francis sued the Missouri voting registrar, arguing “[i]t is impossible that this can be a republican government, in which one-half the citizens thereof are forever disenfranchised.” The Supreme Court upheld the discriminatory law, stating “[i]t cannot for a moment be doubted that if it had been intended to make all citizens of the United States voters, the framers of the Constitution would not have left it to implication.” A bust of Virginia Minor was placed in the State Capitol Building in Jefferson City, Missouri, in 2013, the same state that refused her right to vote in 1875. 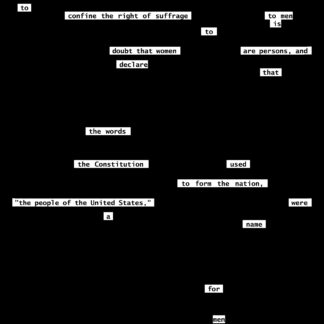