Dicta: Brown v. Board of Education

Black families in Topeka, Kansas, tried to enroll their children in the schools closest to them, which were schools designated for White students. Each child was refused admission and directed to schools for Black children, which were much further from where they lived. Initially, the trial court agreed that educational segregation had a negative effect on Black children, and it applied the standard of Plessy v. Ferguson in finding that the White and Black schools offered sufficiently equal quality of teachers, curricula, facilities, and transportation. The Supreme Court reversed this decision based on the Fourteenth Amendment ruling that Plessy’s “separate but equal” principle is inherently unequal.

The integration of schools faced immediate backlash, and similar cases continued to appear in the Courts to challenge segregationist resistance. In 1979, on behalf of her own children, Brown sued the Board of Education again, claiming that segregation of Kansas schools continued. She won her case in 1993. 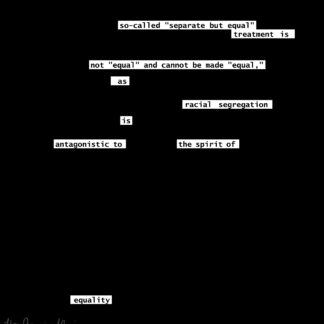