In North Carolina, police officers unjustly arrested Dethorne Graham, a diabetic Black man, who was suffering from an insulin reaction. The officers ignored his friend’s pleas to give him sugar as they placed him under arrest, cuffing his hand tightly around his back.  Graham filed suit alleging respondents had used excessive force, in violation of his Fourth, Eighth, and Fourteenth Amendment rights. The Supreme Court rejected Graham’s arguments, ruling that excessive use of force claims, whether deadly or not, must be evaluated under the “objectively reasonable” standard of the Fourth Amendment, the question being how would a reasonable officer have acted in that circumstance. The notion of what is objectively reasonable expands significantly if the accused officer perceived their life was at risk.

The criteria set out in this case was used to acquit four LA police officers after their brutal assault on Rodney King in 1991. The objectively reasonable standard set forth in Graham v. Connor has  also been raised to defend police in the killings of Michael Brown, Samuel DuBose, Jamar Clark, Keith Lamont, George Floyd, and many others. 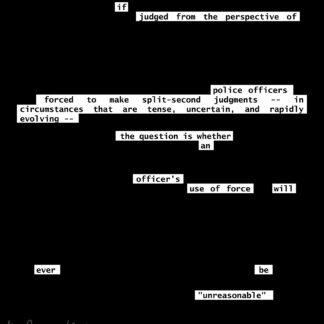